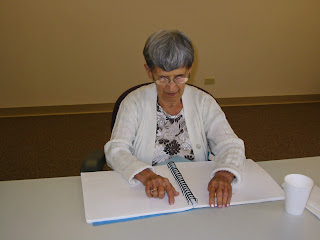 Editor’s Note: We know her as the tiny, intelligent, fierce 90-something who still lived in her own home, came to the CCB for Senior activities almost weekly, Loved the NFB and spoke to our Convention in 2013 and 2014. In the latter presentation, part of the CCB Report, Marie talked about the One-touch Self-defense class she and other seniors had just completed. The buzz was that she was rather formidable.

No surprise, she came to the Senior program at the CCB at age 87 and set to work learning Braille. Later, she conquered an iPad using Voice Over. On February 5, just three months after speaking at that Convention on November 1, 2014, Marie Dambrosky passed from this life. She was 96

Her memorial service is set for Saturday, March 7 at 1 p.m. at the Evanston Community Center, 2122 S. Lafayette St.

Her own words are enough to tell what kind of a woman she was, and how she dealt with her life after becoming blind. They will be more than sufficient for any casual reader to know how much we all miss her.

Even though I have had visual problems for over 30 years (Glaucoma) and with Cystoid Macula Edema in my right eye, I have been able to work and function fairly well. I retired from Arapahoe Community College in 1984.

I noticed a change in my sight in the spring of 2006. Seeking second opinions from ophthalmologists, I was told nothing else could be done.

Self help was the purchase of a Visionary reader and ZoomText software for my computer. My next step was to find help with the rest of the new found problems.

I found my answer the beginning of 2007 when I contacted the Colorado Center for the Blind. The CCB staff especially Duncan and Sharon with their counseling and at home evaluation and support have been a God send for a more stable life. (I live alone in my own home)

I would sincerely appreciate any support that can be given to CCB for their ongoing vision for additional services.


From the Summer, 2013 Seniors in Charge,
the newsletter of the NFB of Colorado’s Senior Division

Marie Dambrosky is a 94 year-old participant in the Senior Program at the Colorado Center for the Blind. She is inspiring to all who know her. She continues to live independently in her own home near the University of Denver. She uses a white cane and is dedicated to new learning. I asked her how she keeps motivated. Here is what she told me.

“I’m so darned curious. I want to know how things work. Some of it comes from my childhood. We were brought up that way – to keep on going.”

Marie grew up in Saskatchewan until she moved with her family at age 16 to Minnesota. There she went to a trade school and started work as a telegrapher. She later became a branch manager for Western Union. She eventually graduated to computers and has been a ham radio operator for 55 years.

She says, “I am very happy that I found the CCB. It is one of my chief places of communication and support of all kinds. I appreciate the support of the CCB, all their inputs. They are part of my family. I have that support every week. If I couldn’t go to CCB, it would almost be like not going to church!”

Cooking is a big part of Marie’s life. She loves to experiment with new recipes. She recently baked cookies to give to students at the CCB.

Marie does her own grocery shopping, using a shopper’s assistant.

“I don’t mind getting groceries that way. I prefer it – it gives me independence and a greater control of what I get.”

Marie just keeps learning and trying new things. She recently purchased an iPad and has already learned how to send emails.

“I enjoy life,” she comments. I worry sometimes that there won’t be enough to do and I might get bored, but something always pops up.”

Here is some advice from Marie:

“Seek information. Get information from medical sources, the internet, organizations and people. Find out what you can about your situation. The more information you have, the better you can handle it.

“You’ve got to have a sense of humor or you won’t live well. Here is what I learned from religion – we are not in charge, but we have choices. We sure have an opportunity to make changes. This is one of my main ideas of life.”