Three October Screenings of "Do You Dream in Color" 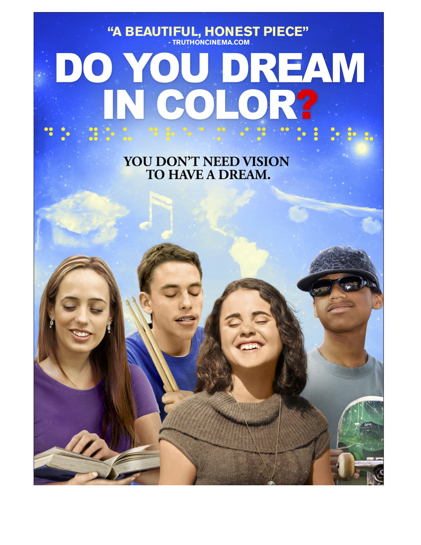 Coloradans have three chances during October's "Meet the Blind Month" to see a screening of the documentary "Do You Dream in Color".

The community is invited to share the story of four blind teenagers as they struggle to navigate the low expectations they confront in school and society. Connor wants to be a sponsored skateboarder. Sarah wants to travel the world. Nick dreams of being a rock star. Carina wants to be the first member of her family to graduate high school.

Filmmakers Sarah Ivy and Abigail Fuller received a $15,000 Jacob Bolotin award at the 2017 National Federation of the Blind Convention for outstanding contributions toward achieving the full integration of the blind into society on the basis of equality.

Sponsored by the North Metro Chapter of the NFB of Colorado

A $10 suggested donation will also get you an Amazing Colorado Raffle ticket, first prize $2,500. To be drawn on October 28 during the banquet of the NFB of Colorado 2017 Convention. 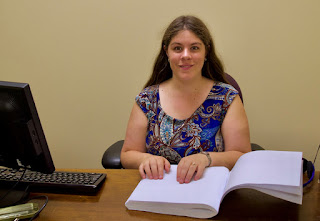 Chris Parsons teaches technology at the Colorado Center for the Blind, so she obviously knows these essential tools and how they apply in the 21st Century workplace.

Braille is also without a doubt one of Chris Parson's 21st Century skills. The bedrock of her education is Braille. So much so that she was a three-time national winner of the Braille Challenge as a youth, and this weekend will be in Los Angeles as a guest alum for the 2017 competition.

With solid literacy skills based in Braille, Chris went on to earn an English degree from Webster University in her home state of Missouri, during which time she worked for two-and-a-half years as  a student writing tutor.  She took up playwriting while in college and says Braille was essential to the process of writing and revising.

"When you're writing dialogue, you have to hear the characters' voices in your head, and you can't do that using an external (synthesized) voice," she says.

After college she worked for over three years as an online writing coach, often relying on a Braille display to view the intricacies of spelling, grammar and sentence structure.

"early on, I would just emboss the student's paper sometimes because I needed to have that Braille hard copy," she says.

Later though, reviewing  and making comments and suggestions on as many as 20 papers a day, she relied more heavily on her tech skills, always drawing on the fundamental literacy she gained through Braille.

"No way could I have ever done that if I hadn't learned to read and write in Braille," she says now.

You can help the National Federation of the Blind of Colorado bring the joy of literacy to blind Colorado youth. This summer, we will hold two BELL camps, the first in Grand Junction begins June 19. Another will be held in Westminster July 18 through the 28th.

The NFB Braille Enrichment for Literacy and Learning (BELL) Academy prepares blind and low vision children, ages four through twelve, to grow into confident and independent blind people who will live the lives they want. The program provides Braille and non-visual skills instruction through fun, hands-on learning in a day program or residential setting. In addition to Braille crafts, games, and other engaging projects, children learn vital independent living skills, interact with blind adults who serve as mentors, and enjoy field trips to sites related to the NFB BELL Academy curriculum. Through these activities and interactions, the children learn that blindness or low vision does not define them or their future.

Braille is the Rails for Literacy and Success! 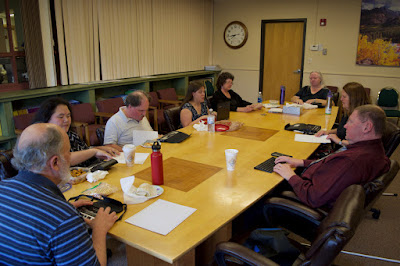 Has technology rendered Braille obsolete ... yet?

This is a question that has been coming up for ... well, since the invention of recorded books, blowing things up on the copy machine, and the development of speech and magnification on personal computers.

It was mentioned by a VR counselor from out-of-state recently - why should his client at the CCB spend time on Braille? Hasn't technology made Braille unnecessary now. That counselor was blind, by the way.

Our final Answer: Still "NO!" An emphatic "No!" because Braille is still about literacy, and none of the above-mentioned suggested options can deliver literacy as effectively or as completely as Braille. They're just bailing twine and duct tape when good welding and good steel are called for.

The photo above is a Tech Department meeting last month at the Colorado Center for the Blind, and one trigger for writing this. I'm shown in it, as are our three full-time Tech Instructors and part-time instructor and in-house desktop support guru. Also shown are Director Juie Deden, Assistant Director Brent Batron and Administrative Support Specialist Carol Sprague. Carol is the only sighted person in the room, and she can be seen using some old sighted technology - paper and a ballpoint pen.

Each blind person in the room has a hand-out embossed in Braille beside them. Of these seven, one is using a laptop, one a bluetooth keyboard paired to a phone, and the other five are using Braille note taking devices. This is our tech team - overwhelmingly literate and proficient in Braille. Chip, Showe, Chris and Yolanda were taught Braille as children, and Braille is the Raills upon which runs their literacy and professional success!

Yes, these things all go together!

Want to help today's blind kids find literacy and pofessional success in their lives? The NFB of Colorado is holding two BELL camps this summer. The first is just a week away in Grand Junction.

The NFB Braille Enrichment for Literacy and Learning (BELL) Academy prepares blind and low vision children, ages four through twelve, to grow into confident and independent blind people who will live the lives they want. The program provides Braille and non-visual skills instruction through fun, hands-on learning in a day program or residential setting. In addition to Braille crafts, games, and other engaging projects, children learn vital independent living skills, interact with blind adults who serve as mentors, and enjoy field trips to sites related to the NFB BELL Academy curriculum. Through these activities and interactions, the children learn that blindness or low vision does not define them or their future.

Braille is the rails, and this train is bound for literacy!

National Federation of the Blind of Colorado Front & Center for National Fitness Challenge!

More than 35 blind runners will run in this Sunday’s Cherry Creek Sneak, and more than half of those will be members of the NFB of Colorado, including students from the Colorado Center for the Blind - nine of whom will be blind Seniors.

In a state where overall activity and fitness levels are among the highest in the nation, and obesity levels among the lowest, it’s no surprise that blind Coloradans are hungry to get involved with mainstream fitness events like Lucky Laces and the Cherry Creek Sneak.

“We just need to create the opportunities,” says WE Fit Wellness Director Jessica Beecham, who has helped recruit many of the blind participants.

“We are thrilled that over half of the 36 blind and low vision athletes will be first-time Cherry Creek Sneak participants,” she said. “Barriers like inaccessible exercise equipment, undescribed exercise videos, and group fitness instructors who are not trained to work with people who are blind are still very real challenges. We are proud to be part of programs like the National Fitness Challenge that help people who are blind and low vision find new ways to lead healthy lifestyles!”

Blind participants are paired with sighted guides from groups such as Lending Sight and three Colorado chapters of Achilles International.

For many of those blind participants, Sunday’s race is the second in a series of four runs which began with March 17’s Lucky Laces and will end on July 1 in Colorado Springs with Get Me Some Color. The Cherry Creek Sneak and the Bolder-Boulder on May 29 fall in the middle.

At least two blind paralympic athletes ran in March and will be in Sunday’s race. But there are plenty of civilians like NFB member Pipi Adams. She completed her first-ever 10k running in the Lucky Laces, and she’s set to do a 5-mile in the Sneak.

CCB Braille Instructor Carina Orozco signed up for the March race the day before when another runner had to drop out.

“It was spur of the moment,” she said, confessing that she hadn’t been training. “It was hard, but it helped me get going on my fitness resolutions.” She’s also running on Sunday.

Both women crowed about their achievements on Face Book later that day. Others did their very first race ever or bested their previous times. And three CCB Seniors, Phyllis and two Ralphs participated in that first race and will be back again on Sunday.

In Colorado, WE Fit Wellness joined up with Achilles chapters in Denver, Colorado Springs and Boulder, as well as Lending Sight, to create motivation and push the challenge even further. That’s how they arrived at the idea of the 4-race challenge.

“The race series provides motivation for our (NFC) participants to keep their step count high throughout the program in order to train for 5k and 10k distance races,” says Beecham.

It’s all part of the National Fitness Challenge (NFC), a partnership between the US Association of Blind Athletes and Anthem Blue Cross and Blue Shield, who have partnered with 13 other groups across the US, notably WE Fit Wellness in Colorado. An Anthem grant means that participants can receive a Fitbit Flex 2 wearable to track and share their daily physical activity.

The NFC started in 2011, but the overall goal remains the same every year, to raise the physical activity levels of each participant to the level recommended by the Centers for Disease Control and Prevention (CDC) - 30 minutes of moderate physical activity and 10,000 steps per day.